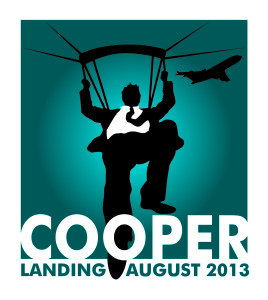 The Washington State History Museum contacts Scroggins Aviation for their assistance with the D.B. Cooper display and help by supplying them with several Boeing 727 items.

Explore the mystery of D.B. Cooper – the man who jumped out of passenger airliner. The Washington State History Museum has open to the public from August 6, 2013 through to January 5th, 2014. Feel as if you’re in an airport as you tour through the timeline and see artifacts such as the remaining parachute from Cooper’s flight. See period advertisements, uniforms worn by flight crews, and a cutaway of a Boeing 727. Who was he? Where is he? What happened to the money? These are all unanswered questions in the open investigation of the D.B. Cooper hijacking of Northwest Orient Airlines 305 in 1971. This exhibit takes you back to that time to look at how airline travel of the 1970s differed from that of today, and to focus on the issue of changes in airline security through the decades. The History Museum will also provide captivating speakers in exhibit-related public programs who will discuss the case of D.B. Cooper. Organized by the Washington State Historical Society. Scroggins Aviation is pleased to participate in the museums display by loaning them several Boeing 727 items.

Local News coverage on the display can be seen at: FOX 13 News – D.B. Cooper